The University of Macau (UM) recently received a donation of 29 rare maps of Macao, the Greater Bay Area, China, and other parts of Asia from Mr Leong Su Sam, member of the National Committee of the Chinese People’s Political Consultative Conference (CPPCC) and chairman of Sam Lei Group. The donation ceremony was held at the UM Wu Yee Sun Library. The maps are expected to benefit teaching and research in history at UM.

During the ceremony, Rector Yonghua Song received the maps and presented a certificate to Mr Sam to thank him for the donation. Other participants in the ceremony include Vice Rector (Global Affairs) Rui Martins, Vice Rector (Student Affairs) Billy So, Prof Antonio de Saldanha of the Department of History, and Ms Chen Fen, director of the Personal Banking and Channel Management Department of the Bank of China Macau Branch.

Produced in the cartographical and geographical ateliers of France, the United Kingdom, Germany, and Italy between mid-18th century and early 20th century, these maps and engravings reveal the political features and the geography of China – a powerful and vast empire that extended over Asian land and water–from the perspectives of Europe’s most distinguished cartographers. For example, a hand-drawn map produced in 1875, titled ‘Chart G Macao, with the customs stations in its vicinity’, clearly describes the hydrological situation of Macao and its neighboring islands at the time. The Map of Asia with Empire of China from 1853 depicts the route from East Asia to West Africa, with Macao being at the end of the East Asian route. This collection portrays not only the grandeur of China, but also the distinctive international and maritime character of Macao.

After the donation ceremony, UM held a rare map exhibition to show the unique and splendid culture and history of Macao to teachers, students, and the public. The donated maps have enriched the collection of the UM Library and are expected to benefit teaching and research in history at the university. 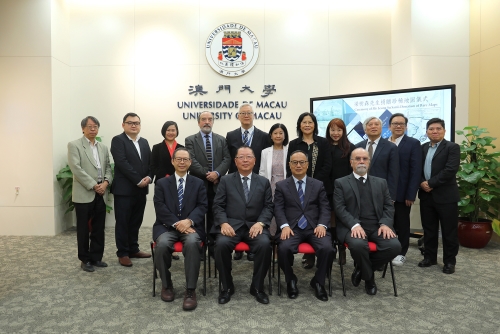 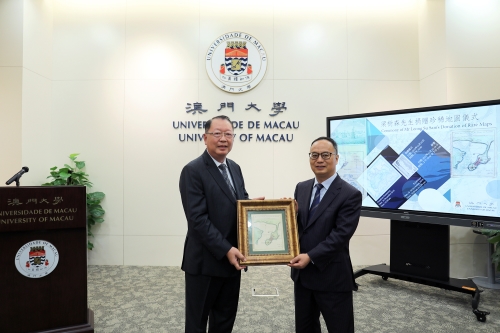