University of Macau received an ancient photo of a cloisonné censer

An ancient photo of a cloisonné censer was donated to the University of Macau (UM) by Professor Antonio de Saldanha of the Department of History, Faculty of Social Sciences of UM. A donation ceremony of a historical picture related to Yuanming Yuan had been held at the University of Macau Library on 4 October 2019. Rector of UM, Professor Yonghua Song received the donation and presented a certificate of appreciation to Professor Saldanha on behalf of UM. In addition, Professor Rui Martins (Vice-Rector (Global Affairs) of UM), Professor Xu Jie (Acting Dean of Faculty of Arts and Humanities of UM), Professor Mao Haijian (Department of History, Faculty of Social Sciences of UM), Ms. Cindy Lam (Director of Alumni and Development Office of UM), Dr. Jianzhong Wu (University Librarian of UM), Dr. Raymond Wong (Associate University Librarian of UM) also attended the ceremony.

In their speeches, Professor Saldanha, Professor Mao Haijian and Dr. Wu had explained the historical and cultural values ​​and meanings of this photo from different levels and different perspectives.

The cloisonné censer in this photo belonged to the imperial collections in the Yuanming Yuan, which witnessed an important moment in the long history of China. According to one of the major scholar-experts in looted artifacts of Yuanming Yuan existent in Europe, Prof. Louise Tythacott (School of Oriental and African Studies in London), considering the improvised style and poor arrangement of the censor, it is possible that it was taken immediately after the censer being looted during the Second Opium War by 44th British regiment, still in China, in 1860. Therefore, this picture could be older than the oldest known picture displaying the censer in a British military mess (1864).

In general, the photo donated to the University of Macau has a double value: not only does the photo itself have a historical value, it also proves the true existence of a Chinese cultural relic that exists outside China. 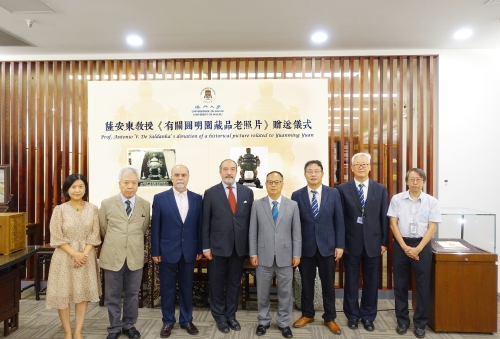